Nice, a town that has a big history in the world of triathlon. It hosted the first triathlon in Europe on November the 20th in 1982 with 57 competitors. The famous and one of the most successful triathletes of all time, Mark Allen, could win this race 10 consecutive times. So what better place can you ask for hosting the Ironman 70.3 World Champs. The setup in 2019 looks a bit different. Over 3600 male and over 2000 female athletes lined up in the biggest 70.3 world champs race to this date.

Taking part in a world champs event is always something special. For me it was the second time after Zell am See 70.3 in 2015. During the last 4 years a lot of things have changed. When I first raced in 2015, I was a newbie to this sport with no experience. This year was a bit different. Having a few 70.3 and Ironman races under my belt, I came with different expectations. My mantra for this race was something down this line here…

“Be willing to have a crack at it. Race fearless, take a risk! Come with no expectations,
just race as if you have nothing to loose and enjoy the experience”

My lead up to this race was very good. I have trained consistent and with good quality and my fitness was probably at its peak this year. I was confident and looking forward to this race. We arrived just a few days before the race and I wasn’t able to do a proper on course analysis of the bike course. I knew that this was not optimal but I was not worried too much.


I attended a race briefing hosted by Purple Patch Fitness where the likes of Mark Allen, Matt Dixon founder of Purple Patch and Andy Blow from Precision Hydration shared some really good insights to this race. One thing was clear: This is a race made for cyclists with very good climbing and descending skills. I love climbing but I am not a very good and confident descender and not knowing the course would be a challenge.

The swim in the mediterranen see was awesome. I love swimming in the ocean with salty water and bit of a current. I was well equipped with the skills for this swim, despite it being a non wet-suit swim which puts me in a disadvantage.

I have had my best swim performances in wet-suit races but I was confident enough to put out a solid swim without a wet-suit. Exiting the water just a bit after 31 minutes was “okish”. Not my fastest but also not my slowest swim. I swam in a good straight line but was probably not pushing enough. It felt like a bit too easy swim for my likes but anyway I was onto the next challenge. Focusing only on the 1 thing ahead of you.

My strategy was to use the first 10 km to settle into a good rhythm and holding back not trying not to too hard too early in the race. Lots of riders were shooting past me at the initial 10 km or so. Pushing very hard. I tried to ignore them and do my own thing. My heart rate was settling pretty quickly and I got into a nice rhythm. Not having riden the course prior to the race I just relied on the research and analysis I have done of the course. I had my nutrition plan dialled in and adjusted to this course. Fuelling prior the long climb and prior the long decent to make sure I am focused and have enough calories in my body. Fuelling during the descent was going to be tricky so I made sure I had plenty in the tank.

The first 2 steeper climbs where not too bad. Short but very steep. I didn’t worry too much about over pacing here and was simply riding the climbs with good form and managing the terrain as best as I could. There is anyway no easy way up a steep climb 🙂 At km 27 the long 9.6 km climb up to Col de Vence started. That’s where I started to push hard and managed to overtake a lot of other athletes. I pushed a strong Zone 4 effort, sitting at about 245 Watts, about 85-90% effort. It felt good. My legs were feeling smooth and I had fun climbing up that hill. After about 33 mins I hit the top of the climb. 2/3 of the bike leg were done. Now it was time to start the most difficult part of the ride.

The long downhill part. That’s were things got a bit uncomfortable as I was descending. Not knowing the course I was very attentive and careful. Lot’s of riders were shooting down the hill like there was no tomorrow. It got pretty packed and it was very difficult to ride at some stages. I just didn’t want to take any risks so I rode as good as possible as I could while riding safe and fair.


At some occasions I got quite angry at some other cyclists as they were ruthless to their other fellow riders. It was a bit intimidating and also frustrating seeing people riding past me that I have overtaken on the climb.


I pushed hard again on the flatter sections to make up some time but once I hit the last 10 km of the race I felt like I have lost valuable time. My legs felt fresh, probably too fresh at this stage of the race. I was hoping the bike leg was longer so I could gain back some time. I entered T2 after 2:47 hrs on the bike. I didn’t evaluate my performance at this stage and was just focused on my next task. In T2 I took a wrong turn and I had a little blackout not finding my transition bag. I tried to stay calm and relaxed exiting T2.

The most important time of your run are the initial 10-15 minutes. If you mess them up it’s hard to have a good run in the end. My focus was purely on the following things. Carrying good arm and leg speed and running with an upright position. I was not looking at pace or heart rate and was simply running by feel for the initial 3km or so. At the race briefing Mark Allen gave away a good race tip for the run. He said to focus on 1 single thing during your run and keep reminding yourself to this 1 thing. Whatever that 1 thing is. Make it your anker to hold on to when things start to go bad. For me this thing was: Holding fast arm speed! I knew that if I can hold fast arm speed my leg speed will be high too which results in a fast pace!


From the start of the run I felt really good. My legs were fresh and actually stayed that way for most of the run. A clear sign that the bike did not do too much damage to me. I broke down the run into smaller sections. Running from aid station to aid station. On each aid station I cooled myself down and re-hydrated. I was running the first 10 km with a flask where I had some electrolytes and carbs. A big shout out here to Ausdauervutter which was my main fuelling source for this race. The right choice again! Keeping that flasks proofed to be a good thing as I could always sip a little bit every 10 mins or so to keep myself fuelled and hydrated. After 10km I consumed 1 gel and on the last 7km or so I started with coke to bring me to the finish in 1 piece 🙂


The crowd helped me to push through. I was running with a big heart and a smile on my face. It felt great knowing to finish strong with a good run. I crossed the line after 1:22hrs of running. It was a new PB for me.

I had a good race but not a perfect race at all. I did not take the risks I probably could have taken. I swam well, I biked too conservative and below my capabilities but I ran fearless and left nothing in the tank. A strong finish. Happy end. It was one to remember for sure.

My race season is slowly but surely coming to an end with this event. It’s time to take a step back, reduce the rigorous training and recharge the batteries. My focus over the next weeks will shift, I will give myself permission to let go of my fitness. I want to stay healthy, do things that do my body and soul good, more of relaxing stuff, yoga, strengthening my body, working on flexibility, doing mindful work, writing, sharing ideas, helping my clients moving forward. Give more, take less. It has been a good season, with ups and downs, with valuable lessons that hopefully help me and the people around me. Triathlon is an awesome sport but be careful that it does not take out the fun and the enjoyment. Don’t take it too serious, it’s just swim bike and run 🙂 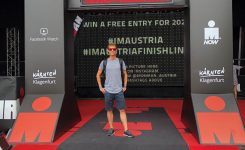 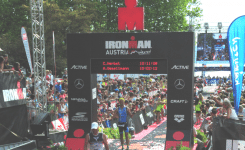 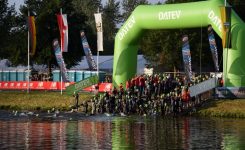 No comments so far.

This site uses Akismet to reduce spam. Learn how your comment data is processed.